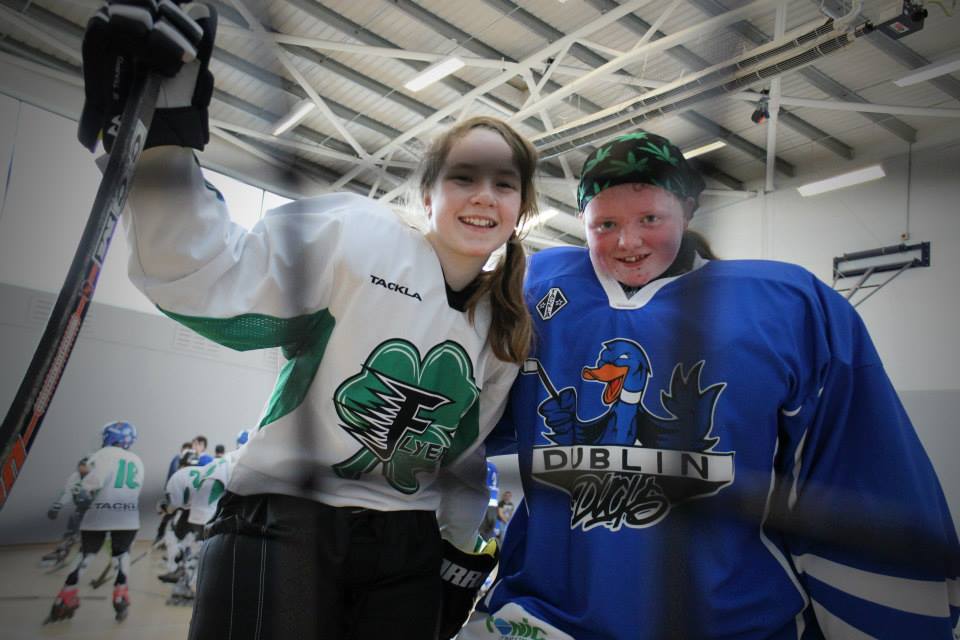 Saturday the 5th of April, two Dublin teams took to their wheels in a head to head match in Mountview Sports Hall, Clonsilla. We had the Dublin Ducks IHC taking on the Jr. Flyers IHC.

With the lack of ice rinks in the country the two Dublin teams, and their rivals from around the country, have taken to wheels .

The game was comprised of three 20 minute periods.

Both teams started well and the score was kept to 0-0 for the first 15 minutes until a lovely sniper shot by young Stephen Hayes, # 22, from the side line lifting it into the roof of the net.

The Flyers replied with their defenseman rifling one home from the half way line just beating the home keeper Adrienne Miller, # 1, on her left side. That goal ended the first period.

The second period stayed at 1-1 but was a very hard fought 20 minutes. With Dublin Duck Coaches John Behan, Aisling Daly and Chris Sweating making tactical changes and giving encouragement to their team the Jr. Flyers had some very close calls. With the double threat of Filip Mislovic and Ivan Pantepajevs leading the charge for the Jr. Flyers the Flyers coach Will Fitzgerald,“had bit his finger nails to the skin”, on the near goals from his team. A long awaited whistle from the referee finally came ending the second period.

With a much needed brake the kids came out strong. Both sides hungry for the victory. The Dublin Ducks opened the scoring in the third period with another from young Stephen Hayes. This took the score line to 2-1. The Ducks kept up the strong pressure with Daragh Daly lifting a lovely shot over the right pad of Flyers goalkeeper Tomek the followed by another from Nathan Daly and another from Daragh Daly.

The Flyers seemed beaten until they struck back with a quick line change by coach Will Fitzgerald catching the Ducks on a line change. This resulted in a 4 on 0 with the Flyers beating Ducks goalie Aido by deaking her out of her net and leaving it the net open for the Flyers to slot one home.

The Flyers kept up the pressure till the final whistle ending the game. The ducks were triumphant by the score of 5-2.

The two will clash again in a return game in Ballyfermot Sports Hall. Date to be announced soon.

We are all sure that the intensity of this rivalry will be on hand for all to see in the next game. So make sure to make it to the next game and cheer on all the players.