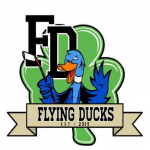 Great news came from the Flying Ducks camp today as it was officially revealed that the club are expanding into the Senior territory. The Flying Duck’s, a team merged by the Dublin Ducks and the Flyers Ice Hockey Club, will open senior registration for the 2015/16 season.

Will Fitzgerald, the Vice president for the Flying Ducks said

“The Flying Ducks have a number of junior players who are developing theirs skills and some have been selected to represent the IIHA in the National Development Teams. By having a senior team in place our Flying Ducks juniors have a seamless transition within our clubs structure.”

With the club looking to hit the 2015/16 season fast, it has opened recruitment for all senior teams looking to play hockey in Ireland. If you’re interested you can get in touch with the club’s Vice President Will Fitzgerald by email (vp@flyingducks.ie) or by mobile phone on 086 8746347.