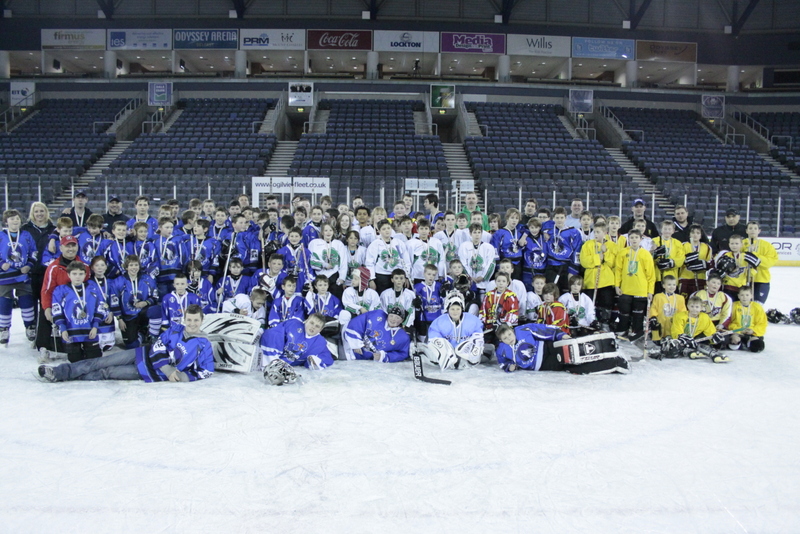 On Saturday, February 22nd 2014, The biggest Junior Ice Hockey All Ireland Championship, sponsored by a very generous donation from I-Skate and a wonderful selection of fresh fruit from Keelings, was held in the Odyssey Arena, Belfast. A total of six junior teams from the Republic of Ireland, being; The Longford Hawks, Athlone Hawks, Flyers IHC, Cork Wolfpack, Kilkenny Storm and Dublin Ducks, totaling over one hundred and thirty children under the age of sixteen years old, took part in what can only be deemed as the ‘Creme de la Creme’ of Junior Hockey tournaments. Parents, Supporters, Coaches and Officials brought the attendance to nearly three hundred people. Over all the Under 12’s was won by Cork Wolfpack and the Over 12’s event was won by The Dublin Ducks, although every team played with utmost determination and integrity.

The ‘W5’ interactive gallery provided many hours fun and learning for all the children and adults as part of the events organised for the day. The staff were friendly and accommodating as there was nigh on one hundred and one children and ninety eight adults bubbling with excitement, eager to learn and full of questions. Pizza Hut in the Odyssey Plaza, did a commendable job seating nearly two hundred people in three sittings before over one hundred and eighty members and players of the IIHA went to see the Belfast Giants play Coventry Blaze in a highly entertaining game.

The event could not have gone so smoothly or to such a high standard if it were not for the hard work from many volunteers. So we take this opportunity to thank the following;

John Behan, Aisling Daly and Will Fitzgerald for their dedication and fantastic organisation skills, Aaron Guli, the current President of the IIHA, who assisted and oversaw the event from beginning to end, is an inspiration to The Coaches, officials and all players involved in the IIHA, Jana Gerkena and Mark Pepper for Officiating the event, Beatty Hosgood and Jim Pepper for the grooling background work, Hockey Locker for supplying neck guards directly to the rink at short notice, Alan McNeice, Nicky Johnson and Mick Cummins for carefully documenting the day and finally thanks to the Belfast Giants for popping in – you really did make the day for the children!

Click to Play Video
A little video from the Junior Hockey Tournament
held at the Odyssey Arena,
Belfast on the 22nd Feb 2014
Tags: HeadlinePress Releaseshare: