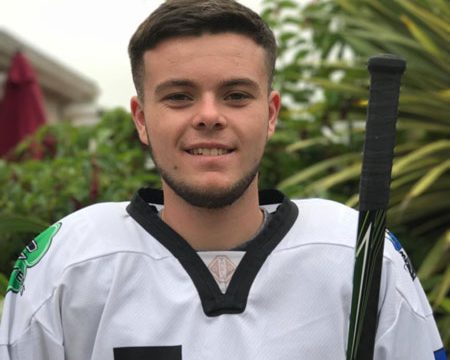 Mark Murphy’s heading to the Home of Hockey

Mark Murphy, a young 16 year old from the Flying Ducks team in Dublin is heading to the Home of Hockey, Canada, for 1 year. Mark will be heading to Montreal, a city he visited earlier in 2017 when the Flying Ducks team visited the city with almost 50 people. Mark had arrived in advance of the team’s arrival on St Patrick’s Day where he was living the life of a Canadian hockey player. Mark also didn’t neglect his schooling. He attended a local school (North Star Academy, in Laval) and developed wonderful relationships with not only his teammates from Somang Hockey but also his school mates; many of whom were saddened to see him depart in late March.

Mark started skating in Skate parks when he was 9 year’s old because he had some problems with his feet. His tendons weren’t growing so the doctors advised he try roller skating to help to stretch them. Fantastic advice. Mark’s sister, Kerri, was doing figure skating at Castleknock on Ice, and one morning he was asked by Aisling Daly, President of the Flying Ducks Ice Hockey Club, to try Ice hockey. Mark loved it from the start. He showed a decent skill level for a first timer. Mark had tried Soccer, Gaelic football and hurling but never kept any real interest. “Mark loves being on ice and he sometimes gets a bit passionate about the game” said his proud dad, Darren. Mark’s passion is what drives him and greatly benefits his abilities. Mark loves learning about the game and passing on what he learns to his teammates in the Flying Ducks, particularly the junior players.

“He loved the whole Montreal experience”, said Mark’s mother Debbie. Mark showed huge commitment to his team, he had one of the best attendance records for training sessions. Mark has been part of the HERO’s programme in 2014 and 2015. In 2015 the group had the honour of meeting and being spoken to by NHL legend Mr. Brian Burke. He certainly took Mr. Burkes advice.

Mark was recently interviewed on Canadian radio, Irish radio and published in the Dublin Gazzette newspaper. His favourite players are Patrick Kane and Sidney Crosby. His favourite team are Chicago Blackhawks. Mark departs for Montreal on the 2nd of September. The IIHA wish Mark the very best of luck in his hockey adventure.

Mark is also looking for support. He has set up a GoFundMe page where he is aiming to raise funds to help with the cost of the year trip and schooling. If you want to help Mark please click HERE.